Brewery insights from the people who make what you like to drink.

The Brewshed Alliance lecture series is making its debut in Monument on Oct 19th at 6pm to talk about… Bats! Grab a beer (or three, depending on your love of bats) and sit back and listen while Pat Grove, naturalist & volunteer with CPW, present on BATS!

Fountain Creek Brewshed Liquid Lectures are free, interesting, open to the public, all ages welcome and best of all… take place at a brewery! Lecture will last about 40 minutes and end with a Q&A session.

HOTSHOT Green Chili Beer is back!

Hotshot Green Chili seasonal is now available in 6-packs for a limited time!

Available at both brewery locations: 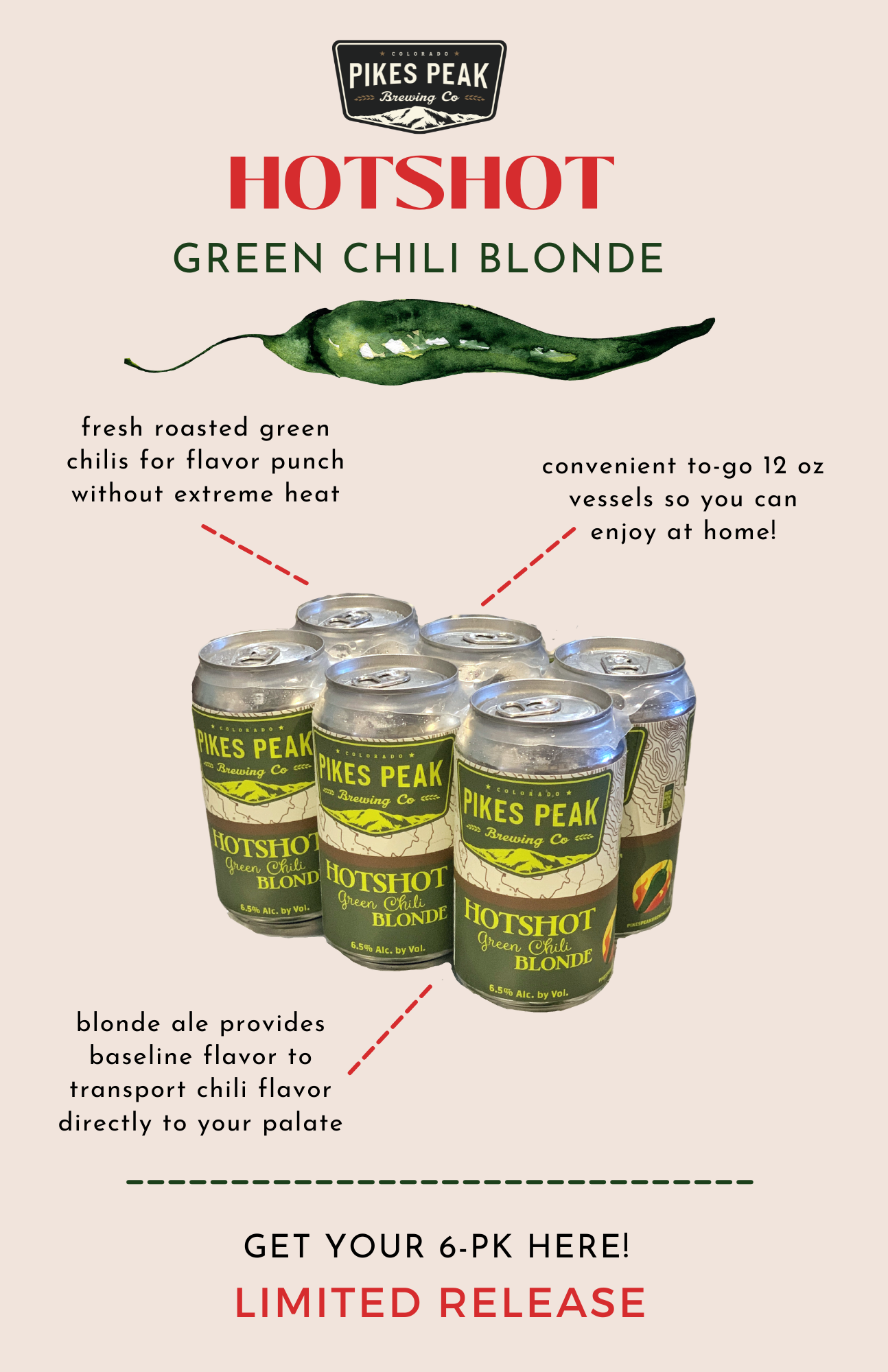 Das Fest on Oak – Just like the names says, but aged on oak!

Oktoberfest at our Monument brewery is September 24th!

You might have heard about Thiols, or thiolized beers… but have you ever tried one? Thiols, along with other compounds like terpenes and esters, contribute to the desirable aromatics found in hoppy beer styles. We recently went down the rabbit hole on this recent trend out of New Zealand to uncover our own take on the new even fruitier, juicier IPA. Our Founder and Head Brewer, Chris Wright, describes it as an attempt to squeeze as much fruity flavors out of a beer as possible, by unlocking flavor compounds not previously available.

So, what is a Thiol?

(If you are not a nerd you might want to skip this section, really we’re not kidding.) A thiol is an organic compound that is high in aromatic molecules, specifically sulfur-containing organic compounds with a sulfur atom bound to a hydrogen atom. Scientists first identified them in hops in the early 2000s.

A more common occurrence of the “skunky” off flavor is when your beer has a slight skunky aroma after sitting outside on a patio. That is the result of the iso-humulones in the hops interacting with UV light, the resulting compound is Pepé Le Pew’s favorite scent, or more affectionately referred to as 3-methyl-2-butene-1-thiol. So in summary, thiols are good AND bad, just depends on their journey in the process.

Back to the good thiols!

In brewing, these high aroma-active compounds derived from hops give a very intense fruity flavor, but mostly due to the dry-hopping process and how the thiols in the hops and wort interact with the yeast. Although there is still a lot of research being done to nail down how exactly thiols occur in the beer and wine fermentation processes.

You can uncover your eyes now. We’ll stop with the nerdy stuff.

How do you unleash the good thiols in brewing?

We sat down with Chris to ask him how he did this. It turns out that our changes in process mainly came from the mashing process and then using a newly developed hybrid yeast strain made from a combination wine yeast and London ale yeast. This enabled the yeast to biotransform the thiols from the malt and hops into the aromatic over-achievers that they are. Omega Yeast describes it best in the blurb below.

“Volatile thiols are highly impactful aroma compounds that evoke grapefruit, passion fruit, and guava and are found in a variety of tropical fruits, wine grapes, and hops. These thiol compounds exist in two forms — free forms, which are highly aromatic and volatile, and precursor forms (i.e., glutathione- and cysteine-bound thiols). The precursor forms, abundant in malt, are non-aromatic and require yeast with β – lyase biotransformation activity to release them. Hop varieties vary widely, not only in the amount of thiol compounds, but also the percentage that are in the non-volatile precursor form.The precursor for 3‑sulfanyl-1-hexanol (3SH, but also referred to as 3MH — a thiol known for its intense grapefruit and passion fruit aromas) is abundant in barley, but does not reach sensory thresholds until converted to its free form. In beer and wort, the overwhelming majority of these thiol compounds are in precursor form (1000-fold!) and are a stockpile of aroma potential with a yeast capable of biotransforming them to the free volatile and aromatic thiol compounds.

(reference Omega Yeast: All about our Thiolized yeast series)

How did the beer turn out?

On tap now at our Monument brewery as Experimental IPA (vol 1), this hazy New England style IPA has a big juicy flavor profile with notes of mango, stone fruit and citrus.  We were restrained in the dry hop amounts to really understand what flavors we were able to pull out of the thiolized yeast.  And we couldn’t be more happy.  We are continuing to experiment marrying the perfect combination of flavors and aromatics from the malt (thiols) and hops.

Try this version and stay tuned for the next edition in a few weeks, when we up the dry hop profile!